"STILL The finest side in the whole of London SE10"

GMM are extremely fortunate to have Mike Jewitt as our musician. 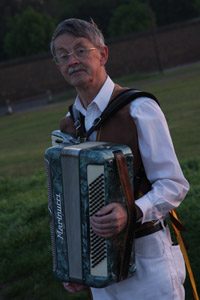 Mike’s first instrument is the accordian which he plays with style. Thank you Mike!

Most people (well at least Colin, Bill, Paul and Ged) agree that “squeeze box” Morris music is best played on a “diatonic” instrument. This means that you get two notes per button according to whether you are pushing or pulling. This gives the music an inherent rhythm. (Imagine having two mouth organs joined by a bellows).

Mike is currently hohnering his skills on a diatonic instrument – a melodeon, similar to The Squire’s.

We're looking forward to dancing tomorrow around the #Southbank as guests of @NorthWoodMorris, along with @offcutmorris, Greenwich @squiregmm and Marlings Clog Morris. Schedule below... #morrisdance

Dancing up the the sun this May Day on Blackheath, then off to Rochester

Folk pals: Have the BBC Folk Awards just stopped? They never came back after lockdown, does anyone know if an announcement was made? I can’t find anything online, if you’re in the know please tell me

Theme by Anders Noren — Up ↑